Diving Wonders of the World 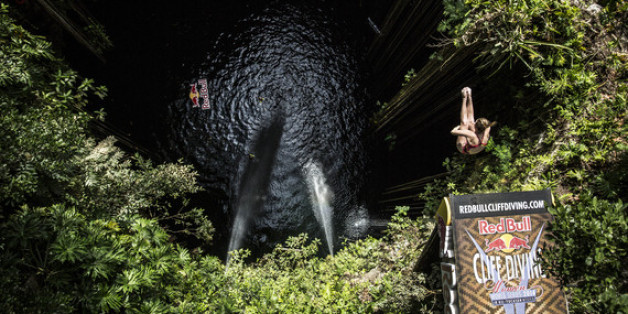 On October 16, I commenced a journey from Seattle to Mexico’s Yucatan Peninsula. Two flights and 12 hours later, I eagerly arrived, impatiently waded through customs, made a few second pit stop for a required fever screening (due to the Ebola outbreak) and was greeted by a spirited young man who would be my driver for the next couple of hours.

“Yesterday, I was pulled over by the police and my first thought was, ‘this is going to be trouble,’” he shared. I probed for more detail and he explained that apparently, the drug cartel was using a specific type of vehicle to transport their “goods” and as it turned out, the van we were in mimicked it to a tee — an interesting start to my trip. “But then I handed him a water from my cooler here, and they happily went on their way,” he reassured me. The air-conditioned ride was an abrupt contrast to the outside — a steam room that was only mildly tempered by night. Even though my peripheral vision was obstructed by the darkness, the lush greenery that outlined the worn roads was beautiful.

The next morning, I made my way to Il Kil Cenote. I read about it beforehand and pored through hundreds of photos, but none of it prepared me for the actual experience. It was unassuming at first as I walked over to the perimeter of the crater-like sinkhole and gazed into it — from that perspective, it was deceivingly small. A series of approximately 50 steps carved from the stone that surrounded the sinkhole led me down a relatively steep, cavernous passage to the bottom of the cenote. The instant my foot touched the last step, the vast, tropical ecosystem opened up and all of my senses were ignited. I stared upward roughly 25 meters and was mesmerized by the ponytails of vines and roots that draped and lined the cenote from top to bottom; the flock of small birds that wove in and out of them rhythmically, catching pockets of sporadic sunlight. Black catfish blanketed the water while camouflaging themselves against the dark abyss below, and the moist limestone walls were enchanting.

But the most impressive of all of the natural wonders was the bold, graceful dive that I witnessed, from near the top of the sinkhole — a fall of approximately 85kph that left me in awe. Twenty-six years of age, fearless and determined to pioneer a new path for women in the sport of extreme cliff diving — one of eight international women participating in the Red Bull Cliff Diving World Series, 2014 — Texan Rachelle Simpson catapulted her muscular body off of the board, dancing through the air as a crowd of us held our breath until she emerged from the water after hitting it with a dubious thud.

Next came fellow American, Ginger Huber — exuding an ear-to-ear grin and confidence while demonstrating that age certainly is just a number (soon to be 40), she took to the water like it was second nature. Given the velocity of the dive, if any one of the competitors is off of alignment even inches, the resulting injury could easily morph into one of catastrophe (Adriana Jimenez, representing Mexico, suffered a mild concussion after one of her dives). I asked Ginger, “Do you have any fear from the top as you’re looking down?” To my surprise she didn’t hesitate to say, ‘yes.’

I have a lot of fear, actually. I’m really afraid of becoming badly injured and incapable of doing anything. But it’s that few seconds that you’re in the air — the feeling that you’re flying, the wind hitting your face and hearing it pass over your body. It’s all worth it for those couple of seconds.

Anyone who dares to take the plunge into the unknown can relate to the feeling of anxiety that accompanies it. I inquired, “How do you overcome the anxiety just before you jump?” Ginger’s face became more animated. She recalled a conversation with her father-in-law: “He’s a therapist and I asked him about how to handle my anxiety — the heart pounding, hands tingling, all of that. He said, ‘Ginger, no one has ever died of a panic attack. Try to recreate one right now.’ I couldn’t do it. His perspective made sense and even though I still experience some anxiety now, I just know that when my hands start to tingle, I’m going to be fine.”

Both women mentioned that their background and career in working with whales and dolphins at various marine parks had facilitated their readiness for the sport. Given the lack of training facilities that emulate the cliff diving height, Rachelle and Ginger said they practice whenever and wherever they’re able, which makes their extreme diving that much more challenging and precarious.

Rachelle, demonstrating an endearing innocence coupled with utter passion, shared, “I was sick all night. I think I ate something bad. I was up every hour or two.” Her biggest fan and supporter (husband), carrying all of her trophies and encouraging her to eat a banana, interjected, “we probably had two or three hours of sleep but she’s a champ. She still got out there, gave it her best and performed really well.” “It’s nice of you to say that about her,” I said. “Well, someone has to do it because she won’t say it about herself,” he explained, as she humbly smiled and refuted, “well, on that last dive my legs were shaking. I had nothing left in me.”

Mexico’s Yucatan Peninsula was the last stop of a string of exotic international locations that concluded Red Bull’s 2014 Cliff Diving Competition. Rachelle took first standing for the overall and Ginger, fourth, landing her a pre-qualifying slot for the 2015 series. Just before we departed, Rachelle, giddy with hope and brimming with adrenaline still high from her win, said:

“I’ve spoken with women divers who came before us and wanted to see this sport take off for women. They’re so happy that we’re making it happen now and we’re really wanting to bring this sport to the 2020 Olympics. We already have an opportunity to showcase the sport in 2016 so we’re hopeful.”

Ginger and I ran into one another after she received her trophy. “How long do you think you’ll continue on with the diving?” I asked. “Well, even now I end up with huge bruises after each dive and my husband and I are like a couple of old people each weekend, stretching out our sore feet and bodies. But I would like to do this as long as I’m able. Until I can clearly see that the other girls are far better with their dives. And as long as I can break even financially and inspire others, I’m happy to keep going.”

Then she said the words that were a true testament to her dedication and affection for her passion: “You know, actually, even if I lost money doing this I’d probably still do it.”

Some of us embrace hobbies and careers that might deliver minutes or hours of freedom and exhilaration. We can’t always articulate the sensation but it’s grand enough that we dive in regardless of the cost or potential damage. The pain of the bruises, lethargy and anxiety-filled palpitations pale in comparison to the few seconds of euphoria that superimpose it. And fortunately, the world has trailblazers such as Rachelle and Ginger who trade great risk for fleeting adoration — they are the unique few who pave a bright and promising path for the rest of us.